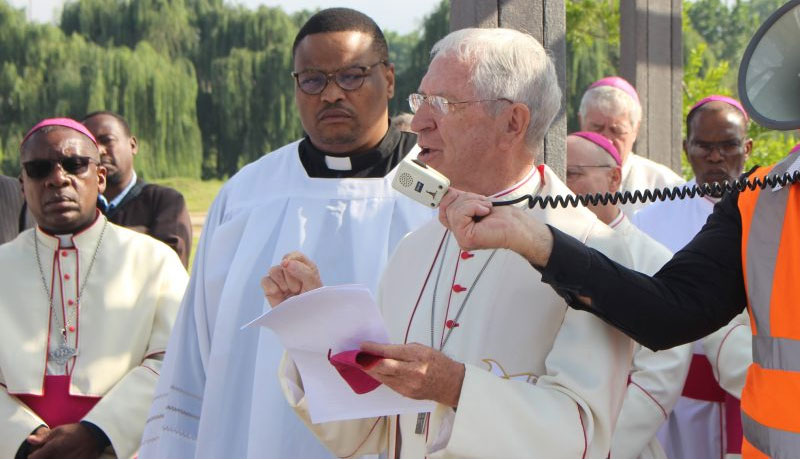 REFLECTIONS ON THE 2 PASTORAL PLANS

Our Catholic Church, the People of God, is a living faith community, called to bring the Good News of Jesus, and the Transforming Mission of Jesus, to the real context and situation of people, communities and nations in every age. Every age reveals different characteristics in terms of the developing socio-political-cultural context – and this is true for our context in Botswana, eSwatini, and South Africa. It is that total context in a particular age which challenges the Church to discern what is termed the “signs of the times”, i.e. what God seems to be saying to us in our actual situation, and to define and redefine the vision, mission and ministry of our Church in relation to those particular signs of the times.

Jesus himself discerned his calling and mission in the context of his “signs of the time”. His mission and ministry unfolded after that visit to the Synagogue in Nazareth, when he read from the scroll of the prophet Isaiah, and so clear was the call to him in those words, that he could proclaim: “This text is being fulfilled today even as you listen…..” As he began his ministry he was challenged continually by his own “signs of the times” – the suffering of the people, and the socio-political context of his age. This context was characterised, among other things, by widespread violence. Even before Jesus was born the socio-political landscape was peppered with protests and uprisings, often very violent, against the injustice of the Roman oppressors, Herod and his sons, and the religious and political power structure. Jesus preached and witnessed against violence; he preached the message of the Beatitudes: be peacemakers, “love your enemies”.

So, too, the socio-political context of the Church, especially in South Africa, in the 1970s and 1980s. The dehumanising apartheid system, violence and massive human rights abuses, all of which seriously damaged the dignity of people who were made in God’s image, challenged us as a Church – what was God saying to us through all this? The response was to engage in a long and widespread consultation in the communities and among the whole People of God.

This process of discernment and consultation led eventually to the promulgation of the 1989 Pastoral Plan, entitled “Community serving Humanity”. This was a challenge to our faith community to live out in multiple ways faith in action – faith in action! It brought together two parts or facets of the single Mission of the Church……to be a faith community in all its dimensions – faith, prayer, liturgy, catechesis and so forth – but at the same time a community which would reach out in service of all people in their actual situation, with all their needs.

This first Pastoral Plan served the Church well as the Conference Departments, Commissions and Associate Bodies gave guidance and practical support to programmes on the ground in the dioceses and parishes. A great deal was learnt over the years both before and after 1989.

But then came 1994, and a new dispensation in South Africa. The years since then have revealed how we as a Church community tried to continue our mission and ministry according to the Gospel and values of Jesus, but now in a different context to that of the first Pastoral Plan. The Church could now no longer oppose an unjust and oppressive illegitimate Government, but had to discern how to develop a prophetic but constructive partnership with a legitimate Government. This response of the Church continues until today – to always examine legislation, policies and practices/programmes of the Government at national, provincial and local level in the light of the effect these policies and practices have on people, and especially on the poorest and most vulnerable members of the society. That has been our consistent approach down the years since 1994, and this approach of the Church is equally relevant to the developing situation in eSwatini and Botswana.

So, the same challenge to live our faith in action continues, but now it has to be discerned in the developing context of this age. There are new needs and challenges, e.g. a very violent society in South Africa; abuse and violence against children, girls and women; the HIV/Aids crisis which continues to confront us to this day, and so on.  The Church cannot remain distant from these crucial issues, but also, significantly, a new “sign of the time” challenges us…. the tremendous damage being done to the environment and all the species on the earth, and the call to both respect, protect and preserve the creation to ensure the very future of “Mother Earth” and all in it.

This is a very important new facet for the Church’s mission. The prophetic encyclical of Pope Francis Laudato Si’ has made a significant contribution to the debate around the world on the issues of climate change and the protection of the environment in order to guarantee the future wellbeing of human beings and the entire creation. The “cry of the poor” now goes hand in hand with the “cry of the earth”!

And so, in the face of new challenges and needs in our local context in Southern Africa, we began a new process of discernment and consultation to examine whether there was a need for a new Pastoral Plan and how it should be formulated.

This is what we are celebrating today, my dear People of God! Our new Pastoral Plan, which we launch today at the iconic Regina Mundi church, a prophetic symbol of the struggle against the oppressive apartheid system, is entitled: “Evangelising Community serving God, humanity and all Creation”.

Every word of that title is important. Yes, we are a “Community” as Church, but the Plan calls us to be an Evangelising Community – firstly, through a truly personal relationship with Jesus in our lives. We are to be rooted in the person of Jesus and the Gospel! Then, as this Evangelising Community we are called to “serve God” in faith and worship in all their forms. Then, to “serve humanity”, all people and communities with their diverse cultures, and their many needs and challenges so that the Gospel can be “Good News” for them, especially the poor and marginalised. We are called to bring Jesus and the vision and values of the Gospel to the socio-political-cultural context in which we live in our 3 countries. And now we are also called to serve “all Creation” – to protect and preserve the Creation and all its species so that all of us – our children and grandchildren and the generations to come – and every creature on this earth can have a future which will continue to be life-giving in the centuries ahead of us.

This is an exciting vision! But each one of us will be needed to make this powerful vision come true at the local parish level, the diocesan level, and the country level in Botswana, eSwatini, and South Africa. Never doubt that you cannot contribute to our Pastoral Plan!  Each of us has gifts, talents and time. We are all needed if this new Pastoral Plan is to make a difference to our Church, our societies, and the environment. Go for it – Jesus and the Holy Spirit is with you! Amen! Alleluia!